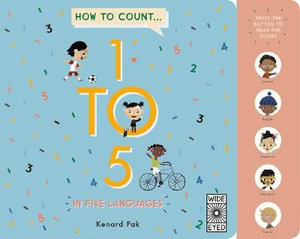 How to Count 1 to 5 in Five Languages

Count to 5 in French, Japanese, Mandarin, English and Spanish with this press and listen board book.

Count to 5 in French, Japanese, Mandarin, English and Spanish with this press and listen board book! Meet children that speak different languages around the world and count with them, from Santiago, who speaks Spanish and counts five oranges, to Marie, who speaks French and counts five penguins. A chunky board book format with push-button sounds along the side, plus gorgeous art from best-selling illustrator Kenard Pak, makes this a great first language primer for curious kids.

KENARD PAK grew up in Baltimore and Howard County, Maryland. After studying at Syracuse University and California Institute of the Arts, he worked in feature animation and music videos. As a visual development artist, hes worked for Dreamworks, Walt Disney Feature Animation, PDI Dreamworks, and he currently works for Laika. His first illustrated picture book was published in 2014. His current picture book projects are self-penned as well as illustrated; the first book will publish in 2016. Kenard lives in San Francisco with his wife and three cats.